The speculation about a pre-poll alliance between the Congress and the Badruddin Ajmal-led All India United Democratic Front (AIUDF) and the signs of dissent within the state unit of the ruling BJP have created a new electoral arithmetic in Assam even though the assembly election is seven months away. Several top leaders of the Assam Congress have publicly said that they favour a pre-poll alliance with all anti-BJP parties, including AIUDF. “We are entering into an alliance with the AIUDF in the greater interest of the people of Assam,” Congress veteran and former Assam chief minister Tarun Gogoi recently said in Guwahati.

On paper, the tie-up between the two parties could give them an edge in over 50 of Assam’s 126 assembly seats by preventing a split of the Muslim vote. Both parties bank heavily on their support given that the community makes up 35 per cent of the state’s population. In fact, the Assam-born and Mumbai-based perfume baron Ajmal floated the AIUDF in 2005 to protect Bangla-speaking Muslims from harassment, considering they are often perceived as illegal settlers from Bangladesh.

Things have certainly come a long way since 2006, when Gogoi had, in the run-up to the state election that year, asked: “Who is Badruddin?” AIUDF won 10 seats that year and 18 five years later, becoming the largest opposition party in the assembly. The party’s tally dipped to 13 in 2016. Gogoi continued calling AIUDF a “communal” party and the BJP’s B team that fields candidates to eat into Congress votes. Most Congress leaders, including Gogoi, believed an alliance with the AIUDF, which is perceived to be a party protecting immigrant Muslims, could alienate the Hindu vote, more so given the BJP’s communal polarisation.

The saffron party, on the other hand, has always alleged a secret Congress-AIUDF pact. While there have been murmurs about such an alliance, the two parties have never had an official pact for the assembly or Lok Sabha election. In the 2019 Lok Sabha poll, the Congress won three of Assam’s 14 seats, all in the minority-dominated areas. The AIUDF did not field any candidate in two seats, hinting at an unofficial understanding. The ‘friendship’ was out in the open this March when Gogoi and Ajmal walked out of the state assembly, hand in hand, after filing the nomination of the Congress-AIUDF joint candidate, senior journalist Ajit Kumar Bhuyan, for the Rajya Sabha election.

The Congress now seeks to formalise its understanding with the AIUDF, in a U-turn from its previously held position. Political observers see it as a combination of the party’s desperation and hope. Since the 2014 general election, the Congress has failed to win any election in Assam, losing even civic body and gram panchayat polls. The party’s three-seat tally in the 2014 and 2019 parliamentary elections is its lowest ever in the state. The Congress won 26 seats in the 2016 assembly election, which was among its worst performances (it had won an identical number of seats in 1978 and 1985).

Following the intense anti-CAA (Citizenship Amendment Act) agitation in the state since last year, the Congress now senses a new electoral realignment. Last December, the Union government passed the contentious citizenship law, which seeks to provide Indian citizenship to Hindu, Sikh, Buddhist, Jain, Parsi and Christian refugees from Afghanistan, Bangladesh and Pakistan. Though this provision covers refugees from the three Islamic countries, Assamese-speaking people in Assam feared it would primarily benefit the illegal Bengali-Hindu migrants from Bangladesh, who are thought to have settled in the state in high numbers. As a result, the Assamese-dominated Brahmaputra Valley had erupted in protest against the CAA, though the agitation fizzled out with the Covid-19 outbreak.

Sensing an anti-BJP mood among the Assamese-speaking people, the Congress feels an alliance with the AIUDF would not be as damaging as it could have been in the past. There are 36 assembly constituencies in the state where Assamese speakers determine the electoral verdict. The AIUDF is not a player in these seats and the battle is between the Congress and the BJP-AGP alliance. The Congress hopes to at least triple its tally in these seats from four in 2016. However, these are theoretical calculations presently. While the alliance may work in Muslim-dominated constituencies, the Congress’s expectation to make a dent in Assamese-speaking areas may be marred by the emergence of new political parties. Two influential student groups, All Assam Students Union (AASU) and Asom Jatiyatabadi Yuva Chatra Parishad (AJYCP), have formed an advisory committee to suggest a way forward to launch a new political party. The two student groups have recently spearheaded the anti-CAA stir in the state. Krishak Mukti Sangram Samiti (KMSS), one of the most prominent social groups working primarily for peasants, has also decided to float a new formation to contest the 2021 election. All these groups draw their support primarily from the Assamese-speaking population and may cut into both Congress and BJP votes.

Besides these external factors, Congress and AIUDF need to cross several internal hurdles before they can clinch a deal. Though Gogoi and Assam Congress president Ripun Bora have shown enthusiasm for an alliance with the AIUDF, several party colleagues are not in favour. An alliance with the AIUDF would mean many of them will be denied tickets. The two parties will have to work out a seat-sharing formula, which is easier said than done. While the AIUDF would want to keep most of the Muslim-dominated seats, it has very little to offer to the Congress in most of upper Assam and tribal-dominated constituencies. To douse the internal tension for the moment, AICC Assam in-charge Harish Rawat has clarified the alliance with AIUDF had not been finalised.

But more than the Congress high command, the BJP national brass has a bigger reason to worry. On August 25, Assam’s finance minister Himanta Biswa Sarma, who has been the chief architect of the party’s spread in entire northeast, tweeted saying he will not contest the assembly election next year. In 2019, he announced he would contest the Lok Sabha election, but Prime Minister Narendra Modi asked him to continue as a minister in the Assam cabinet. Sarma had quit the Congress in 2015 as the party’s then vice president, Rahul Gandhi, did not relent to his demand of making him chief minister in place of Tarun Gogoi. The switch to BJP has not made his dream come true yet. 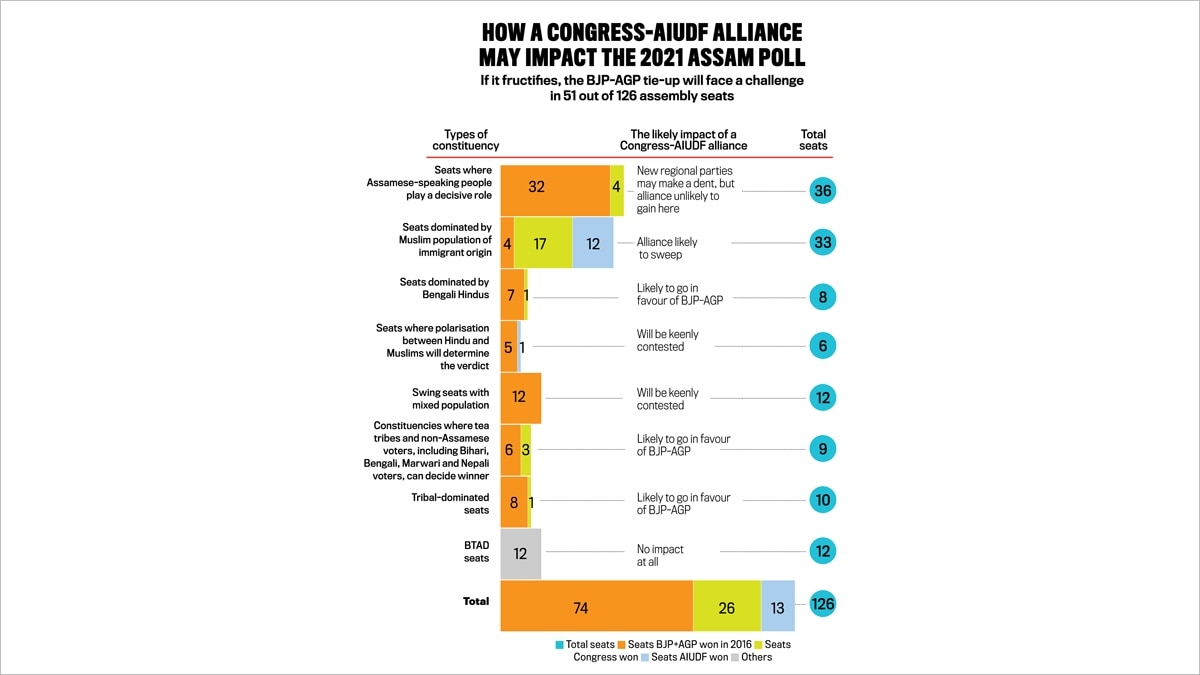 In BJP, he may not have the bandwidth for another rebellion, but by announcing his decision not to contest the assembly poll on the day BJP national general secretary B.L. Santhosh arrived in Guwahati, Sarma has sent the message to the high command that he will no longer be content playing second fiddle to Chief Minister Sarbananda Sonowal. The announcement has already created a flutter in the state as Sarma’s organisational network, electoral manoeuvring and personal equation with alliance partners will be extremely crucial for winning the 2021 election.

Besides, he has also been the go-to man for Union home minister Amit Shah for troubleshooting in the region, from the crisis in the Manipur government to Naga peace talks. If he has to be persuaded back to contest the assembly election, he will expect that the BJP leadership either makes him the chief minister or takes him to Delhi as a Union minister. However, the Modi-Shah duo is not known to give in to tantrums and demands. The contours of BJP’s 2021 electoral campaign in Assam, therefore, will depend on how the two leaders handle the Sarma’s ambition.