It’s been a torrid year for the Indian National Congress since the May 2019 drubbing in the Lok Sabha election. The country’s main Opposition party has lost out to the BJP’s machinations in two states where it had won elections, Karnataka and Madhya Pradesh, and is fighting to save its government in another, Rajasthan. It has helplessly watched one of its most promising leaders, Jyotiraditya Scindia, defecting to the BJP while another one, Sachin Pilot, is almost on the verge of quitt­ing. Optimists will point out that the party has also become part of the government in two states, Maharashtra and Jharkhand, though there is a caveat to this, in both states, the Congress is a junior partner. And seven months into power, the Jharkhand unit of the party is now witnessing some turbulence.

If all this was not enough, a civil war among party colleagues is playing out on pub­lic forums on whether the Congress should begin a much-needed introspection of the legacy of the UPA-II government. As expected, public patience with the party is wearing thin. Of the 12,021 responde­nts the india today Mood of the Nation poll interviewed across 97 parliamentary constituencies and 194 assembly constituencies in 19 states, 47 per cent said that the Grand Old Party was in its death throes. Even such damning figures, however, fail to dampen the conviction of many Congress leaders. “By 2024, the Congress will be a well-oiled system under the strong leadership of Rahul Gandhi and Sonia Gandhi. With the support of the people, we will defeat the BJP because it has failed on every count except on the narrative of disinformation and divisiveness,” says Rajya Sabha MP Rajeev Satav, who had reportedly suggested at a July 30 meeting, convened by party president Sonia Gandhi of its upper house members, that introspection, if need be, should begin from the UPA-II period. Known for his proximity to Rahul, Satav doesn’t see Scindia’s exit or Pilot’s revolt as any existential threat as “no individual is bigger than the party”. Instead, he reposes faith in the hard work done by Rahul, who he says has already “built up a better system that allows youngsters and committed Congress workers to rise up the ranks and reach Parliament”.

Yet, less than one-fourth of the respondents (23 per cent) share Satav’s enthusiasm for Rahul, who resigned as Congress president in July last year, owning up to the party’s disastrous performance in the general election. The Gandhi scion remains the most preferred choice to revive the party’s fortunes, but it’s a sharp decline from August 2018, eight months after he had taken charge, when 47 per cent respondents believed he could be the party’s saviour. The figure is also down one percentage point since January when the last MOTN poll was conducted.

In contrast to Rahul’s diminishing public appeal, the leader who seems to have grown in relevance yet again is former prime minister Manmohan Singh,18 per cent of MOTN respondents believe the octogenarian leader can revive the Congress as against 10 per cent six months ago. The revelation comes at a time when Satav’s senior colleagues took jibes at him for questioning the UPA legacy and indirectly that of Manmohan Singh. It’s also perhaps partial vindication of Singh’s prophecy at the fag end of his second and last term in office: “History will be kinder to me than the media.” For the record, Satav later clarified that his criticism was not targeted at Manmohan who “is above reproach”. 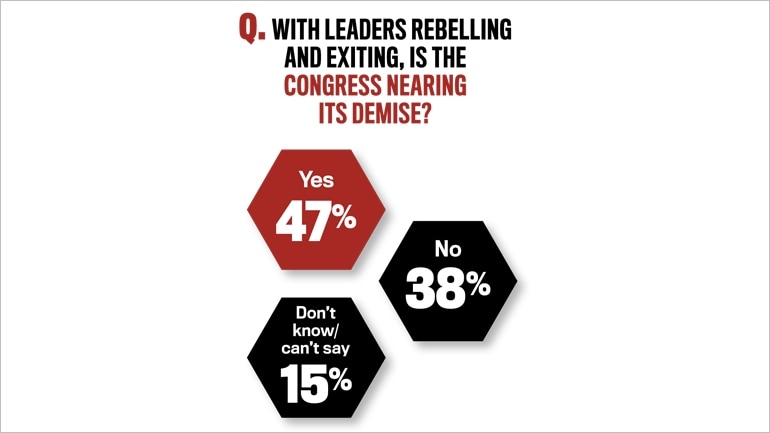 The sudden revival of Manmohan Singh, the first time a non-Gandhi has usurped any of the top three positions as “the leader to revive the Congress”, is also an indication of the leadership crisis the party has been facing since Rahul’s abdication last year. An ailing Sonia Gandhi, 73, was made to take charge in the interim after the party failed to find a replacement for Rahul. While the decision reflected the reluctance of the Congress to look beyond the Gandhi family, it may have paid dividends, 41 per cent of respondents rate Sonia’s performance as good, though it’s down from the 49 per cent support she got six months ago. On August 10, Sonia Gandhi will complete a year in her latest stint as party chief. She was appointed by the Congress Working Committee and, as per the party’s constitution, such appointments need to be ratified by an AICC session. But that has not happened. And with Covid-19 raging across India, such a session is unlikely in the near future. While most Congress veterans are in favour of extending her tenure, Rahul loyalists have begun the chorus for his return. Much to their disappointment, the 50-year-old leader has, for now, opted to focus on his own “lonely battle”, instead of charting out a revival plan for the party and his aides.

In the past six months, Rahul has waged a “video war”, primarily on social media, with a not-so-subtle objective, to build an image as a serious and sensitive leader, and showcase that he is not the ‘Pappu’ the BJP trolls keep projecting him as. He was seen interacting with migrants on the streets during the post-lockdown exodus, discussing Covid-19 and the economy with global experts and dissecting India’s border conflict with China in videos released on multiple social media platforms. The content of these videos also directly or indirectly hint at Rahul’s battle, which centres around creating a narrative against the BJP’s most powerful symbol: Prime Minister Narendra Modi. His reluctance to return to the party helm also has its roots in this battle. In his resignation letter, he mentioned how, at times, he stood completely alone without support from other Congress leaders while taking on “the prime minister, the RSS and the institutions they’ve captured”. His aides say the scenario has not changed much since then.

In a CWC meeting in June, former Union minister R.P.N. Singh, often cast as a member of the Rahul brigade, reportedly said that while the Congress should target Modi’s policies and wrong decisions, the attack should not appear personal. RPN’s comment perhaps was triggered by a Rahul tweet two days earlier, saying that “Narendra Modi is actually Surrender Modi”, a pun on the prime minister accusing him of “surrendering” to the Chinese during the ongoing border dispute with the neighbouring country. Party treasurer and Sonia Gandhi’s unofficial counsel Ahmed Patel also reportedly said that party leaders should be vocal against Modi but avoid use of “intemperate language”. This line of criticism was heard last year as well when Congress leaders such as Jairam Ramesh and Shashi Tharoor had said the party focused too much on Modi personally. Rahul, however, is in no mood to pay attention to such criticism and has continued to attack the prime minister, almost on a daily basis. “I am not scared of PM Modi. I will continue to criticise him. If people here have a problem with it, let the CWC ask me to keep quiet,” he said at a CWC meeting. The next day (July 24), he tweeted, indirectly claiming credit as a bellwether: “I kept warning them on Covid-19 and the economy. They rubbished it. Disaster followed. I keep warning them on China. They’re rubbishing it.” Unfortunately for him, most people are unwilling to see him in that role yet. He may have warned the country of the dangers of the Covid-19 pandemic as early as February 12, requesting the Modi government to take preventive measures, but 61 per cent of respondents don’t find merit in Rahul’s criticism of the Modi government’s handling of the crisis. The political pragmatism of RPN and Congress veterans also found support in the MOTN poll as most respondents don’t agree with Rahul’s criticism of the Modi government over India’s border conflict with China. An overwhelming 59 per cent say he should not have attacked the government on national security issues.

What may also be music to the ears of Congress leaders opposed to Rahul’s brand of politics is that 44 per cent respondents gave a thumbs up to the party’s role in the opposition. Perhaps this is an indication that the nation still has faith in the party but expects it to emerge with a stronger leadership and fresher narrative. “He is different and wants to do politics differently. We should allow him to do so, but then we also would like him to be more active in Parliament and more accessible to the people. As Sharad Pawar advised him, he should go around India,” says Digvijaya Singh, once known as Rahul’s political guru. 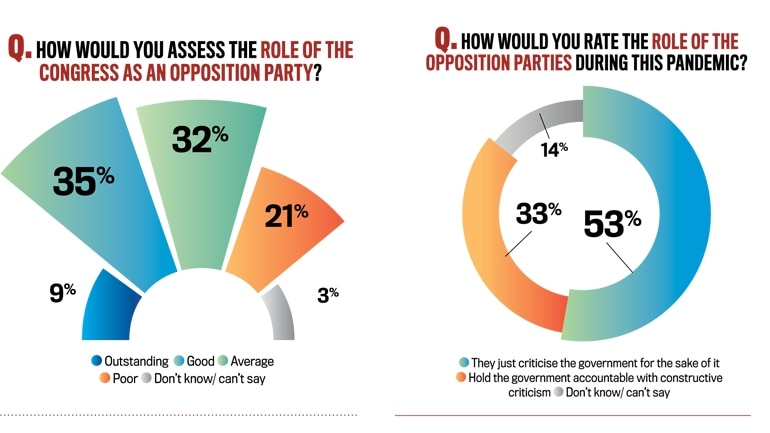 While the Congress, despite the leadership crisis, may still have found resonance among the people, what’s unfortunate for Indian democracy is the failure of the other Opposition parties to strike a chord with the masses. One thing unique to the Covid-19 crisis is that it has hit both the BJP and its opponents equally hard and without exception. If the saffron party is fighting the pandemic at the Centre and in several states, other parties are also fighting the same in their respective states, the Congress in Chhattisgarh, Rajasthan and Punjab; the Trinamool Congress in West Bengal; the Biju Janata Dal in Odisha, the Shiv Sena-Nationalist Congress Party-Congress in Maharashtra; the Left in Kerala; the Telangana Rashtra Samithi in Telangana; the YSR Congress Party in Andhra Pradesh; the Jharkhand Mukti Morcha-Congress-Rashtriya Janata Dal in Jharkhand. So in their criticism of the Centre, they also become part of the blame game, taking flak for the mis-steps in their own states. As for those who are not in power, especially the Samjwadi Party and Bahujan Samaj Party in Uttar Pradesh, nany activity has been only on social media, thanks to the lockdown restrictions posed by the deadly virus. The consequence is a collective failure in making a convincing argument against the BJP-ruled government’s handling of the pandemic, 53 per cent respondents feel the Opposition parties criticised the government just for the sake of it.

The price of this loss in the battle of perceptions seems much higher if seen in the context of this piece of data, the collective vote share of the non-NDA parties, according to the current MOTN poll, is 58 per cent, three percentage points higher than what they got in the 2019 Lok Sabha election. This translates into 227 seats, less than 50 seats from a majority in the Lok Sabha. What’s more significant is that this gain is primarily because of non-UPA parties. The message is loud and clear. The nation, when needed, is ready to look beyond the two national parties, the BJP and the Congress, but other parties must get their narrative right and make themselves heard.