COVID-19 disproportionately kills older people. In India, reports show, about 75 per cent of those who have died (543 at the time of writing) were over 60 years of age, and 42 per cent were 75 and older. Significantly, over 83 per cent of those who have died, suffered from the likes of diabetes, cardiac diseases and high blood pressure. In New York City, the most severely affected city in the US, the country with the most COVID-19 infections and deaths in the world, just 0.04 per cent of those who have died are under 18 years old. None of this is to say children cannot die of the virus. On April 18, a 45-day-old infant succumbed to COVID-19 at Delhi’s Lady Hardinge Medical College and dozens of children in India have been infected. A recent international study suggests that for every child requiring intensive care, some 2,381 children have been infected. Still, the chief burden borne by children around the world has been psychological.

While middle-class children in India must grapple with the claustrophobia of confinement and abundant time but very little to do with it, at least their stomachs are full. Atiya Bose, executive director of the Aangan Trust, which works to protect some of India’s most vulnerable children, says reports from volunteers and the people they work with in Bihar, among other places, indicated that “within the first three days of the lockdown, we were headed for disaster”. Some families in remote parts, she adds, “faced a 3 km walk for a meal, so 12 km back and forth for just two meals in a day.” In cities, though the authorities, in Delhi for instance, have assured reporters that there is food and shelter for all, video footage shows people knocking women and children out of the way to get to food, and lines stretching over a kilometre or two for a bowl of rice, dal and, if they are lucky, a fistful of vegetables. 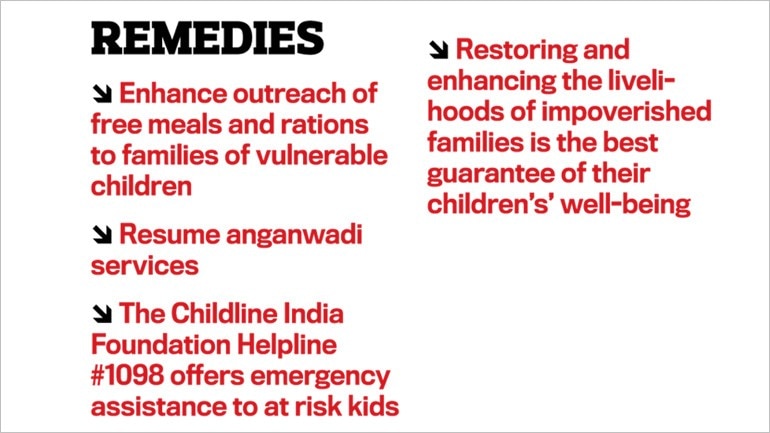 Street children in Delhi, authorities say, are being housed with their families in nearby schools, with social distancing maintained even though a single school may house as many as 1,500 people. But this determined optimism fails to consider the loss of dignity people, even children, feel. Nearly everyone you talk to in a line, outside a school or a soup kitchen, the best of which are run by NGOs rather than the authorities, mentions feeling bereft without work and the ability to feed oneself. And questions too have to be asked about how many people are actually being fed and how many times. Independent observers like Aangan have reported food is not plentiful or universally available. Children have been filmed eating frogs. Tens of millions of people are estimated to not be on any public distribution list and it is unclear if they are receiving necessary aid. In Delhi, the Aam Aadmi Party has said those without ration cards can apply for electronic coupons and that some 1.5 million people have registered in a week and 300,000 people have used the coupons to receive meals. But coupons require smart phones. Inevitably, agents have sprung up, say some daily wage workers struggling to register for the coupons, charging fees that poor people must pay if they want to eat. And you can be sure that if parents aren’t eating, neither are children. According to a report released this month by the United Nations’ World Food Programme, some 265 million people will face acute food insecurity by the end of 2020, up from 130 million people last year. Its chief economist Dr Arif Husain has said in interviews that the lockdown required to combat COVID-19 is “potentially catastrophic for millions who are hanging by a thread… [and] a hammer blow for millions more who can only eat if they earn a wage”.

In India, Animesh Das, a trade union activist, says “the government should ensure working class people are in a position to cook their own food”. The working class includes child labour. As per the 2011 census, there are over 10 million child labourers between the ages of 5 and 14. More recent studies suggest 80 per cent of child labourers live in rural India and over 62 per cent, between the ages of 14 and 17, are engaged in hazardous work. On April 15, 12-year-old Jamlo Makdam, a farmhand in Telangana, set off on foot with a group of women and children for their village in Chhattisgarh, cutting through forests to evade interstate police. Having walked for three days, she died of heat exhaustion and dehydration just 20 km short of her village. State authorities say they will investigate what one official called “a clear case of child labour”.

The UN, in another report released on April 15, summarised the effects of COVID-19 on children in stark terms: “They are expected to be most damaging for children in the poorest countries, and in the poorest neighbourhoods, and for those in already disadvantaged or vulnerable situations.” It estimates that 42 to 66 million children might fall into “extreme poverty” as a result of the measures taken to combat the virus. With the world anticipating economic woes as pronounced as those during the Great Depression of the 1930s, the UN says the progress of the past three years on child mortality will be reversed. Of course, in India 44 per cent of children under five years are malnourished. “Moderate acute malnutrition cases,” says Dr Chandrakant Pandav, a member of the national council on nutritional challenges, “will turn into ‘severe acute malnutrition’. India might face a surprising increase in maternal and child mortality because resource allocations are now completely focused on COVID-19.” Still, argues Pandav, despite the closure of vital anganwadi schemes, mid-day meals, for example, “the benefits of a total shutdown far outweigh the risks.” Other experts, though, contend that this is unknowable until years later, when the effects of current policies become manifest.

It is apparent though that the worldwide shutdown, which nearly all governments insist is our only option, has sinister side-effects for children. The most immediate is hunger. Children are also more vulnerable to abuse, physical, psychological and sexual. Pornography searches in India have risen exponentially since the lockdown began; more disturbingly, according to a report, searches for snuff pornography in which children are filmed being hurt have risen by 200 per cent. Unfortunately, as Atiya Bose says, poor children in India are used to scarcity, to their lives being near constantly buffeted by events they cannot control. What COVID-19 has exposed sharply is that while the virus might not discriminate, society does, and class and caste above all will influence your experience of a harsh, ongoing lockdown. More questions need to be asked of those who govern, of the plans they appear to have failed to make to protect the most vulnerable.