Rameshwar Nath stares at the white-and-ebony foyer of a five-star hotel above the calm turquoise waters of the Dubai Canal. Once brimming, the vast foyer—like the rest of the hotel—is now forlornly empty. For the past 15 years, Rameshwar has refurbished guest rooms, touched up nooks and crannies. The gussied-up hotel guests and the clatter of fine china still takes some getting used to for the 50-year-old painter from a village in Gorakhpur, Uttar Pradesh. “It was thanks to this job that I was able to feed my family back home and send my kids to school,” he says with pride.

Enter COVID-19: the tourism and hospitality sectors started feeling the heat as nations closed borders. Hotels that line the arterial Sheikh Zayed Road or the Jumeirah beachfront must wait out the pandemic before even trying to make their way back to the city. Some hotels have been converted into isolation facilities for the mildly symptomatic who don’t need critical care.

As soon as he heard of a massive repatriation of distressed Indians from the UAE, Rameshwar—placed on three-month ‘leave without pay’—registered. “I need to go home and get treatment for my liver infection. But I don’t know if or when the call will come,” says Rameshwar, one of the more than 2 lakh Indians who have registered for a seat on the Vande Bharat Mission—a veritable tide from a community that makes up roughly a third of the 9.6 million population of the UAE, 90 per cent of whom are expats.

As the pandemic took hold, authorities restricted movement, closed schools, malls and commercial establishments, set up nightly disinfection programmes covering all public areas and worker dormitories and conducted a record 1.2 lakh COVID-19 tests per 10 lakh people. Since then, it has also provided free tests and treatment to all expats who test positive, waived fines for overstaying or expired visas and arranged food and other essentials for workers. Community service groups have caught many who slipped through the cracks. 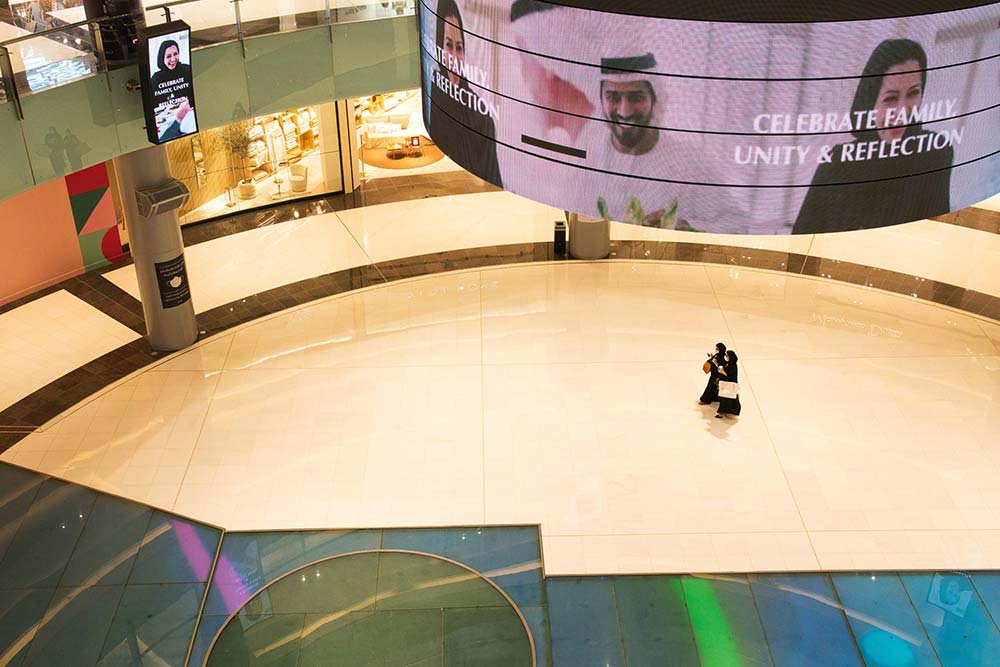 Emirati women at an empty mall in Dubai.

After imposing stringent restrictions on movement and protracted quarantines in localities with a high density of workers, such as Naif in the Deira area, the UAE eased the lockdown two weeks ago—allowing its cavernous malls and restaurants to reopen and resuming public transport with strict precautions in place. The aim is two-fold: to stimulate the retail and services sectors and cushion the economy from further damage while rem­aining vigilant. The result? A new normal of thermal scanners, face masks, long queues at hypermarkets and enf­orced social distancing in a city characterised by throngs. A distinctly similar social discipline pervades neighbourhoods, from the mostly Indian bastions of Bur Dubai and Karama to the glistening skyscrapers of Dubai Marina and the lush greenery of Emirates Hills.

But despite this balancing act, the stark economic realities have not spared the UAE as businesses have felt the impact of plunging consumer demand and the incapacity and reluctance to spend for anything but essentials. Distressed companies have moved to furlough or terminate expat staff, or, like Rameshwar, place them on unpaid leave. Over 2,000 people flew to six Indian states in the first week, including to Lucknow, Rameshwar’s home airport. India has made it clear that the repatriation flights must be paid for. For the flights last week, passengers paid AED 750 (Rs 16,000) for a ticket. Rameshwar says he will somehow arrange the money when his turn comes. Indian missions have also been able to help out a small number who couldn’t afford the tickets. At a time when every dirham counts, some have sold their family gold in the souqs to pay for the ride home.

Also Read | Why China, India Will Suffer The Worst Economic Disaster In Almost A 100 Years

But not everyone is as desperate to leave Dubai. When Mohammad Sameer arrived 18 years ago, his dream was to lay down a solid foundation for life. “I came to the UAE to work at a printing press. Before that, I was in Saudi Arabia for five years,” the Mumbai native says. The company withstood the financial crisis of 2008-09, but folded up in 2017 as work orders dwindled. “I was able to manage till last year. Since then, I have had to change jobs three times in the last six months. I’m currently a real estate agent with no salary–just commissions. When you can’t even step out for a cup of tea, who will go house hunting? It’s really tough to survive, but I haven’t lost faith in Dubai. I haven’t got a penny in my pocket, but if I can hang around for a few more months, I am sure there will be better opportunities here,” Sameer says. 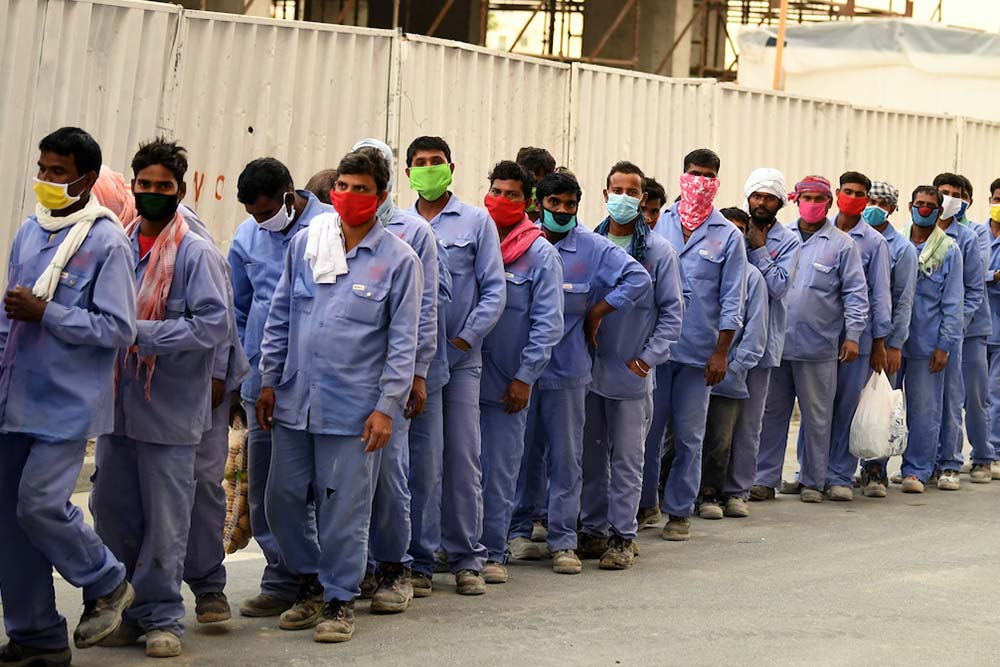 Workers wait in line for food and work in the UAE during the pandemic.

A swift and smooth repatriation of the several thousand stranded Indians has been a key demand made by the UAE to India in recent weeks. With the evacuation finally getting underway, workers have heaved a sigh of relief, but it will be a massive logistical efforts—a fraught exercise at the best of times even between two countries that have historically enjoyed friendly relations. One of the signs of this bonhomie that has blossomed in recent years is the planned Indian pavilion—a four-storey showcase of the nation’s innovations and technologies across 5,000 years–at the Dubai Expo 2020, for which India has allocated $50 million.

All that will have to wait for another year, as Expo Dubai will now run from October 2021 to March 2022—a delay that will allow all 192 participating countries to safely navigate the pandemic. With Dubai aiming to complete 1.6 lakh hotel rooms in time for the mammoth event, Rameshwar hopes there will be plenty of opportunities to come back to. “The UAE has a special place for Indians. They have thrived here within the regulations of the country and mostly got along very well with the mix of populations here,” says Rima Sabban, associate professor of sociology at Dubai’s Zayed University.

“There will be short term pains for the returning Indian diaspora, but then in future there would be lots of opportunities for suitably skilled workers and countries like the UAE will be keen to welcome them back. The UAE has already built an infrastructure for 10 million people. So after an initial slowdown, a very vibrant economy will come from this region,” says K.V. Shamsudeen, chairman of the non-profit Pravasi Bandhu Welfare Trust in Dubai.

Neither Rameshwar nor Mohammad are giving up on the Dubai dream yet. “I came here with a plan to stay for four years. After 15 years, this feels like home and has given me the chance to build a life for my family. Of course, I will come back,” Rameshwar says.

Sameer is just hoping to keep off a repatriation flight. “Everybody here co-exists peacefully. Just one job… any job. Inshallah, I’ll get it and then there will be nothing else to worry about. Well, other than the virus,” he says.

(Chiranjib Sengupta is an assistant editor with Gulf News)