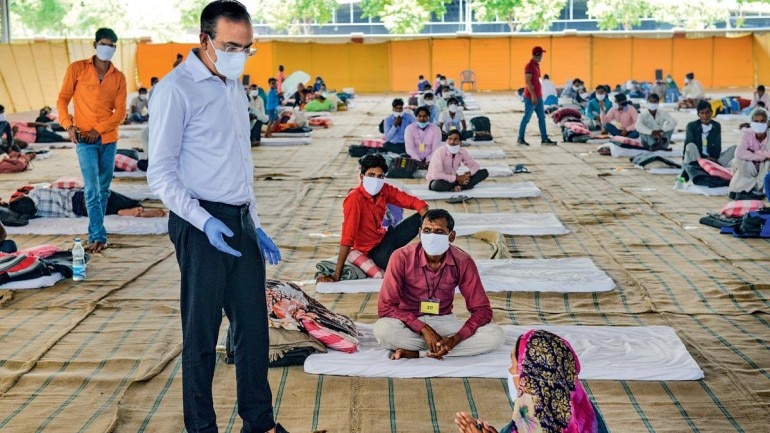 Be safe: Mishra at a migrants shelter run by the Radha Soami Satsang in Delhi

On the night of April 13, the South Delhi district administration was informed about a pizza delivery boy testing positive for COVID-19. A team of officials, led by district magistrate B.M. Mishra, launched a massive search to find the patient and the people he had contacted. The team didn’t go home on the night of April 13 till all the contacts of the boy and the 72 families he delivered pizzas to were traced and quarantined. It turned out he had given samples for testing on April 11 but still delivered pizzas for the next two days. On April 20, all his 16 high-risk contacts tested negative.

Mishra, who had worked as a jun­ior resident at a Delhi hospital bef­ore joining the IAS in 2008, believes “ruthless containment” is the key in the fight against the coronavirus. “I made the contact survey very aggressive from the beginning,” he says. Mishra gets real-time updates about all developments in the district on a Google spreadsheet on his phone.

The first positive case in the district was reported on March 16, of an NRI who had travelled from Singapore. The tech-savvy officer uses two mobile apps, Home Quarantine and Containment Survey, in the containment battle. The former alerts officials if a home-quarantined person breaches the 50-100-metre radius outside while the latter collates real-time information gathered by volunteers during door-to-door surveys in containment zones (eight out of 79 in South Delhi). The Delhi government now plans to use these apps in the other 10 districts as well.

The biggest challenge has been dealing with the slum clusters with over 300,000 population. “We printed awareness material before Holi (March 10), way ahead of the lockdown, and also asked resident welfare associations to stop allowing workers in. It helped contain the spread in the slums,” says the DM. Free food has been arranged for the out-of-work masses. “We have been feeding 110,000 people at 600 places across the district,” he says.

An aggressive containment drive was also undertaken in Sangam Vihar, a congested neighbourhood considered Asia’s largest unauthorised colony. Over 10,000 people were screened and 15,000 contained in three different zones there.

A big success has been the supply of essen­tial goods, for which the district was divided into 70 cluster zones. The supply chain was ensured by advance planning and transit passes were given to wholesale and distribution networks. The district has also allowed many standalone shops to open. South Delhi was the first district in the country to issue passes to Amazon to deliver essentials on the first day of the lockdown. “There were initial hiccups, but they were sorted out,” says Mishra.