Thackeray, however, knows he cannot win this battle without the “extraordinary” performance of his frontline soldiers, the health workers. 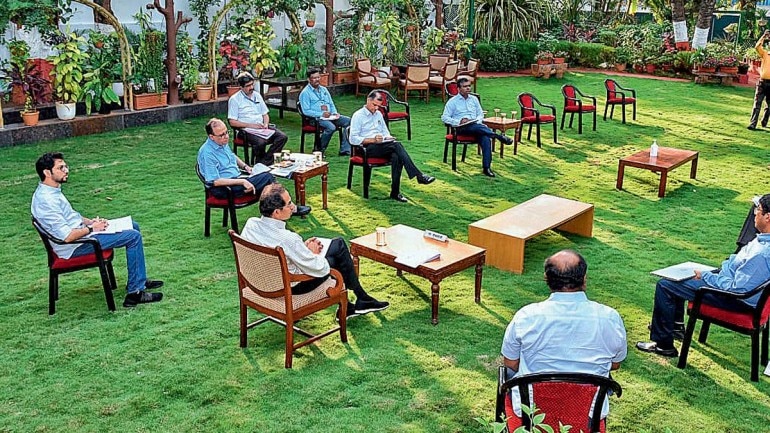 This too shall pass: Maharashtra CM Uddhav Thackeray maintains social distance while holding a meeting at his residence, Varsha.

When the nationwide lockdown began on March 25, Maharashtra chief minister Uddhav Thackeray decided the situation called for innovative ways to manage the crisis. He knew he had to lead by example, make people realise the importance of social distancing in the battle against COVID-19. To drive home the point, he decided, literally, to get behind the wheels. He started driving to work with his security guards coming in another car. He has also been conducting cabinet meetings through video conferencing.

Thackeray, however, knows he cannot win this battle without the “extraordinary” performance of his frontline soldiers, the health workers. Maharashtra’s budgetary allocation for health-related services has risen around 50 per cent in six years, yet its per capita health spend of Rs 975 is one of the lowest in the country. The COVID-19 outbreak has exposed the poor infrastructure in the government hospitals which are still struggling to find ventilators and state-of-the-art laboratories. The doctors are scared, and rightly so, there have been several cases where nurses have been infected.

Yet, there has been no major protest so far and the credit for this goes to Thackeray who has frequently reached out to the health workers, motivating them in this hour of crisis. He has ass­ured the people that there will never be shortage of funds to fight the pandemic and has expedited the process to increase the number of testing laboratories, personal protective equipment (PPE) kits, designated hospitals and quarantine wards. He has also opened a dialogue with opposition parties, industrialists and celebrities, asking them to aid the state government’s efforts. A separate bank account has been created for a relief fund, which collected around Rs 200 crore in just three days. Thackeray has also been addressing the people twice a week via Facebook. A flip-flop on public distribution system (PDS) foodgrains, though, has sullied his image a bit. Thackeray initially announced that the state would be distributing a three-month quota of foodgrains in advance. However, he later changed it to one month, arguing that people might sell off the extra rations.