On July 13, the daily count of new Covid cases breached the 900 mark in Gujarat, with Surat alone accounting for 287 infections, the city’s highest single-day figure yet. It was a new low for this textile and diamond trading hub that is now one of the biggest Covid hotspots in the state. The last time Surat, a city of 6.6 million people, faced a health emergency of such a scale was in 1994 when scared residents bolted out to escape the pneumonic plague epidemic.

As of July 14, of the 42,722 Covid cases in Gujarat, 7,540 had been reported from Surat, many of them textile and diamond industry workers. The city recorded 320 fatalities, over 15 per cent of the state’s death toll of 2,055. More than 12,000 people were in institutional and home quarantine. Officials find reason for alarm as the total active cases (2,472) have doubled over the past three weeks. This has sparked off widespread panic among the diamond polishing and textile business communities just as they were looking to restart operations after a near-three-month shutdown.

The national lockdown, beginning March 25, had put Surat’s 700,000 looms and 350 dye manufacturing units in a limbo. The looms and other related textile activities, which employ some 1.5 million people, ceased to operate, suffering huge losses. With an annual turnover of Rs 96,000 crore, as per industry estimates, Surat’s textile trade, from yarn to finished product, is staring at losses to the tune of Rs 24,000 crore in the past three months.

“The textile industry is paralysed. We do not expect to see a revival before 2021,” says Sanjay Sarawagi, managing director of the Laxmipati group, one of the biggest textile manufacturers of Surat. “Until the business cycle is fully restored, the textile workers who fled the city during the lockdown will not return, and that alone will take almost six months.” The Laxmipati group has an annual turnover of Rs 650 crore and employs some 10,000 workers directly and another 40,000 indirectly. Its once thriving factories and worker tenements are now a picture of desolation.

Manoj Agarwal, president of the Federation of Surat Textile Traders Association, an umbrella group of 65,000 merchants operating in the city’s 170 textile markets, says: “It’s a double whammy. First, GST pulled Surat’s textile business down by over 25 per cent, and now, it’s Covid. Business won’t reach pre-pandemic levels before next year.”

Some traders claim the economic stimulus announced by the Centre has not reached Surat’s textile businesses due to slow delivery and the uncooperative attitude of banks. They complain that banks are not forthcoming in advancing loans so critical for many units struggling to survive. “Instead of showing empathy towards an embattled industry, the banks are more concerned with loan recoveries and payment of loan instalments,” says a textile manufacturer, who did not want to be named. “Had we been given a few months’ breather in the repayment of loans or offered lower interest rates, we could have hoped for a quicker revival.”

Manufacturers also feel banks are interpreting the Centre’s decisions in ways that suit them. For example, they say, the benefit of lowering of the repo rate by the Reserve Bank of India (RBI) is not being extended to existing loans. “There is a huge gap between announcements made from Delhi to help the Covid-impacted industries and the situation on ground,” says a textile manufacturer. Some textile traders demand that the state government offer help by directly placing orders with them. 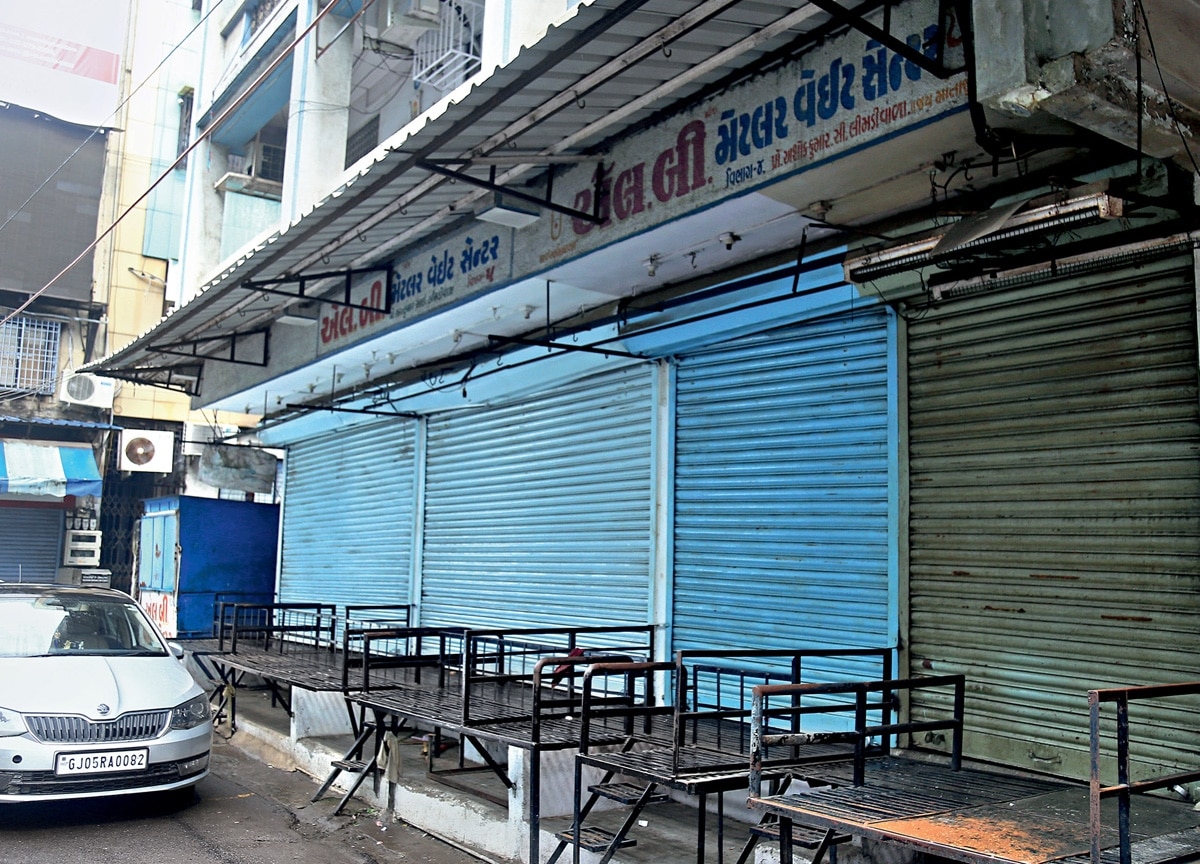 Surat’s diamond polishing industry is battling its own challenges. The city’s 6,000 diamond units employ around 700,000 workers. Around 30 per cent of these units began operations as the Centre initiated the Unlock phase at the start of June, but the sudden spurt in Covid cases forced municipal authorities to shut them down again.

Surat officials maintain the Covid situation was reasonably under control, and cases began to rise once the diamond and textile trading markets began reopening. Also, during the Unlock phase, the workers who had returned to Saurashtra and North Gujarat started heading back in small groups to the diamond polishing units located on Varachha Road and in Katargam, the main centres of the industry in Surat. Work began in many units without much adherence to Covid prevention protocols, workers huddled together at the machines, like in the pre-Covid times, not wearing even masks.

While the textile manufacturing units remained closed, some 6,000 textile shops, spread over five main textile markets in the city, opened for business, without adequate precautions. Amit Shah, a local businessman, fears infections will increase further when the migrant workers return. “Hundreds of thousands of outstation workers employed in Surat’s textile and dye manufacturing units had gone back to their homes in Uttar Pradesh, Odisha, Bihar, West Bengal and Rajasthan. God knows what will happen when they return.”

With cases rising but any hard lockdown certain to hit businesses further, the Surat administration has been attempting a balancing act. For instance, in garment markets that reported Covid cases, only sections where infections occurred were sealed and not the entire market. Critics are not convinced this is the right approach. The opposition has accused the BJP government in the state of underreporting Covid cases and deaths in Surat. “The numbers of Covid victims at the crematoriums and the death toll declared by the authorities do not match. The government is concealing 20-40 per cent of the figures,” alleges Dinesh Kachhadiya, a local Congress leader. The opposition had earlier raised similar suspicion in Ahmedabad and accused the government of passing off Covid deaths due to comorbidities as non-Covid fatalities.

To contain the Covid transmission, diamond merchants have announced a closure of manufacturing units, shops and safe vaults till July 19. Garment traders have offered rotational opening of their shops. The authorities have also risen to the crisis. Surat municipal commissioner Banchhanidhi Pani says: “We are telling people in these industries to strictly follow the Covid protocols. We are also imposing restrictions on a case to case basis in such a manner that Covid numbers come down but business does not get unduly affected.”

Pani, who is strategising the response to the spurt in cases, has been touring the city’s 36 Covid-dedicated hospitals as well as the 14 clusters and 305 Covid containment zones, reassuring people not to panic. “We are not leaving any stone unturned and are confident of turning the situation around,” adds Anil Goplani, chairman, standing committee, Surat Municipal Corporation. Pani refutes the charge that Covid numbers were being underreported. “We fully understand that by hiding figures, we will only be worsening the situation. We just cannot afford that,” he says.