Police in Andhra Pradesh have arranged food, water, buttermilk and a stall of shoes and slippers for those migrants crossing the state on foot as temperature continues to soar. 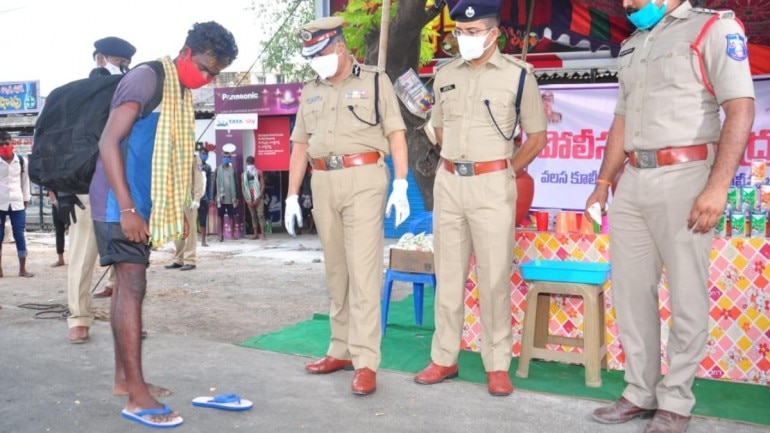 As migrants brave the sun, travelling hundreds of kilometres, to reach their home state, the Andhra Pradesh Police has decided to help these workers as they continue their long march.

The top cops of the state have come forward to help migrants who are crossing Andhra Pradesh to their home states of Tamil Nadu, Karnataka or Telangana.

To ensure that no migrant remains hungry or faces hurdles, Commissioner D Thirumal Rao and his force are providing slippers to migrants.

The police have arranged food, water, buttermilk and a stall of shoes and slippers for those crossing the state as the temperature continues to soar.

Police officials said the step was taken after it was noticed that many of the migrants walking home on foot did not have shoes. Some were even waking barefoot and so it was decided by the top cop to provide slippers free-of-cost.

The officials said the top cop approached some people who helped him arrange essentials for migrants in Andhra Pradesh.

Seventy-nine food counters have also organised along the national highway near checkposts providing food and water to migrants.

Andhra Pradesh CM YS Jagan has also given instructions to officials to take care of migrant labourers walking to reach their native states.

All police check posts in the state which share border with Telangana, Tamil Nadu, Karnataka and Odisha have staff from the revenue department. These officials have been directed to counsel migrant workers to move to relief centres with a promise that they will be sent to their homes in Shramik Special trains.

Another 22 Shramik Special trains are scheduled for this week carrying almost 33,000 people to their homes.