IN these difficult times, with India battling both the Covid pandemic and a plummeting GDP, Prime Minister Narendra Modi has prescribed atmanirbharta (self-reliance) as a principle by which India could regain her feet. Many have agreed that this principle could well benefit the nation. In that vein, another suggestion made by the prime minister, this one on August 15, 2019, at the Red Fort, could prove helpful to the tourism sector. “Apna desh dekho (see your own country),” Prime Minister Modi said that day, urging Indians to visit at least 15 domestic tourist destinations by 2022, as this would not only help Indians discover their own heritage, but also provide a significant boost to the tourism sector. This was an idea that minister for tourism Prahlad Singh Patel reminded the assembled guests at the third edition of the India Today Group’s Tourism Awards, which was held online. “The two crore people who usually travel abroad should see the country,” he said. “The Northeast and Himalayan states are places to discover.” 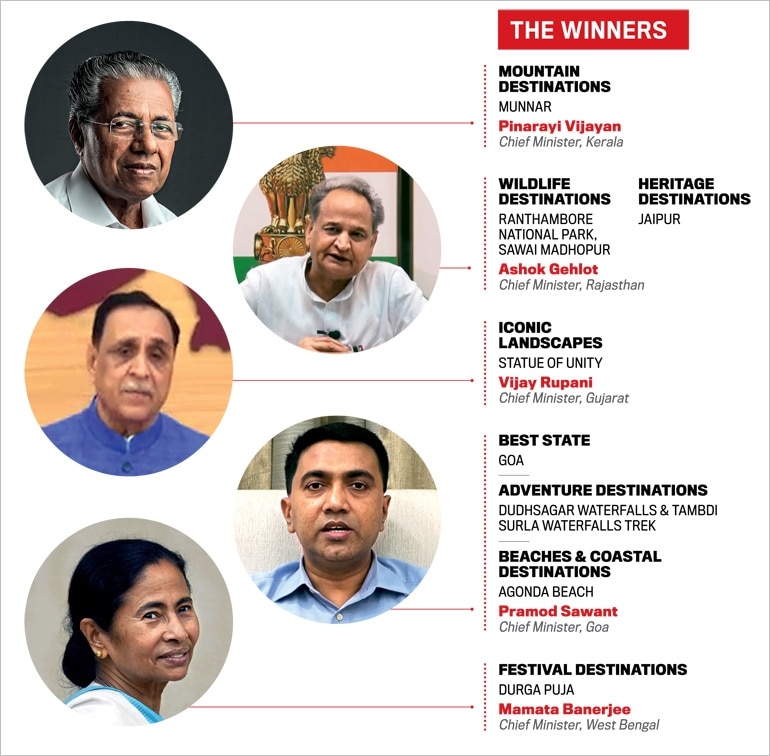 At the beginning of the programme, India Today Group Editorial Director, Publishing, Raj Chengappa, pointed out that boosting local tourism and “going vocal for local” would be key to getting the tourism industry back on its feet. “With the macro challenges facing tourism, it may be best to focus on boosting domestic or even local tourism,” he said. “Perhaps, in the pandemic cloud, this is a silver lining, for Indians to discover India.” Echoes and variations of this idea cropped up repeatedly through the programme, with participants and speakers reflecting on ways to reinvent tourism, not only to resuscitate the sector, but also to revive the economy at large.

Speakers at the summit considered at length how possibilities for travel could be unlocked without compromising on Covid safety protocols. They also stressed the need to directly address the fear that the pandemic has wrought in people’s minds, and how this fear has made Indians prisoners in their own homes.

Picking up the thread of Indians exploring their own country, additional director general at the ministry of tourism, Rupinder Brar, noted that “responsible and sustainable eco-tourism is the mantra” of the post-Covid world. She also pointed to a collateral benefit, that as a result of the inward focus, domestic tourism is being recognised as a huge, sustainable market in terms of both supply and demand. “People are looking beyond the typical tourist spots and have become creative in crafting their own itinerary,” she said, “taking up forest treks and adventure tourism and looking to connect with nature. Instead of the five-star comforts of hotels, people are increasingly inclined toward smaller establishments and home-stays, looking for homely atmosphere and home food.”

Sanjay Kumar, Punjab’s additional chief secretary of tourism, pointed out that Punjab, apart from catering to tourists visiting the state itself, also serves as an on-transit destination for those visiting tourist and pilgrim sites in nearby states and Union territories such as Jammu and Kashmir and Himachal Pradesh. He said that since travel to these places has begun once more, it is only a matter of time before Punjab itself becomes a popular destination. He also noted that during the lockdown, the Punjab government had identified the inherent potential in developing ‘farm tourism’ as an economic sector for the state’s businesspeople. “We have ignored domestic tourists for too long,” he stated. “It is time to incentivise domestic tourists and bring them back to kick-start the economy.”

During the panel discussion, ‘Hotels as Destinations in a Quarantined World’, Kapil Chopra, founder and CEO of the Postcard Hotel, said that leisure hotels were recovering business at an increasing pace as many Indians, tired of being confined to their homes, have now begun looking for weekend getaways. “Leisure hotels are already back to 50-60 per cent of pre-Covid business levels,” he said. “However, luxury business hotels in cities have been severely impacted and revenue is down by 80-90 per cent. This is because people are not travelling for work—business is down and people have adapted to new ways of working.”

On a related note, Sonu Shivdasani, CEO of resort chain Soneva, pointed out that leisure travellers are far more productive for the city, state and national economies than business travellers since they spend more, on visiting tourist sites, on going to theatres, museums and other cultural sites, on eating out, while the latter group typically did little more than attend to their own business on visits to other cities before flying back home once more. Shivdasani’s chain of Soneva hotels in the Maldives has seen an increase in bookings for October, November and December because of pent-up demand.

Moving forward, many hoteliers have begun offering private and highly personalised experiences to draw tourists. Saurabh Rai, executive vice-president at Preferred Hotels & Resorts for South East Asia, the Middle East and Australia, noted that resorts and regional getaways were doing better than other hotels, saying that this underlined the growing demand for experiential travel. “Covid has taught us the importance of leisure, of purposeless travel,” he said. “It is a big moment of realisation for many, that life is short. [The pandemic] has given many people a wake-up call about making ‘the now’ count, rather than waiting for tomorrow.”

In discussions about potential solutions to revive the tourism sector, Jenu Devan, the commissioner of tourism in Gujarat, said that the state government was looking at promoting specific locations to boost demand. He also said that they have come up with two tourism policies, heritage tourism and revised home-stay tourism which are expected to be huge draws as the country opens up once more. Similarly, Vishal Dev, the commissioner of tourism in Odisha, said that his state is looking to promote eco-tourism destinations.

V. Kapur, additional chief secretary in Tamil Nadu, suggested that states should look at ways to incentivise travellers and encourage them to visit. He suggested that tourists be offered direct incentives, such as discounts on travelling, and that efforts be made to restore and improve flight connectivity and instil confidence in visitors so that they are reassured that it is safe to visit.

One encouraging takeaway from the programme also came from commissioner Dev, who noted that a survey conducted by the state government had found that 81 per cent of tourists wanted to come back again, and that 80 per cent said they had missed travelling during the pandemic.

Perhaps, as India and Indians become more accustomed to the safety protocols of the post-Covid world, it will become easier for people to take up their backpacks once more. As commissioner Devan said, the need of the time is “thoda hat ke socho (think differently)”, for people to inspire their inner travellers once more. And there are plenty of options, from wellness tourism to eco-tourism, adventure tourism and much more.

Aiming for the top

A reason to travel – Nation News